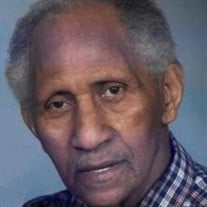 Waymon &#8220;Buck&#8221; Jackson, Jr., 87, of Chattanooga, passed away Friday, March 13, 2020 at his residence. He was employed by L.T.V. Steel and retired after 38 years. Waymon was a faithful member of Miracle Missionary Baptist Church... View Obituary & Service Information

The family of Waymon "Buck" Jackson, Jr. created this Life Tributes page to make it easy to share your memories.

Send flowers to the Jackson, family.