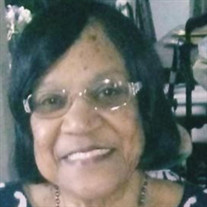 Ossie Ola Smith, 76, of Chattanooga, passed away Tuesday, June 16, 2020 at her residence. She was educated in the Chattanooga Public Schools and attended Howard High School. She was employed with Helig Meyers Furniture as a sales assistant.... View Obituary & Service Information

The family of Ossie Ola Smith created this Life Tributes page to make it easy to share your memories.

Send flowers to the Smith family.