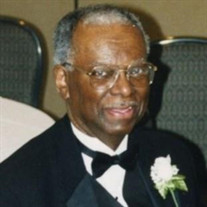 John E. Baldwin, Sr., a native of Chattanooga, departed this life at the age of 87 on Tuesday, May 24, 2022, in Nashville Tennessee. He was a 1952 graduate of Howard High School after which he enlisted in the U. S. Air Force. With twenty years of honorable service to our country, he retired from the Air Force as a Master Sergeant. Later, he enrolled at Lipscomb University where he earned a B.A. degree in Bible Studies. Subsequently, he earned a Master’s degree and 45+ graduate hours from Tennessee State University in Guidance and Counseling. After being employed with the Metropolitan Nashville Public Schools for many years as a guidance counselor, he retired from the school system. John served as a minister for several congregations of the Church of Christ: Alton Park (Chattanooga), Sand Hill (LaVergne), West Eastland (Gallatin) and as Assistant Minister for Schrader Lane (Nashville). He was known for being an avid Bible scholar and lauded for his teaching skills. John was preceded in death by his parents, George and Susie Baldwin; a sister, Dorothy Baldwin Patterson; and his beloved wife of 62 years, Ruby Watkins Baldwin. The memories of his life will continue to be celebrated by his children, Debora R. Baldwin, Ph.D. of Knoxville, TN, John E. (Idella) Baldwin, Jr. of Hendersonville, TN, Roderick B. (Atty Lisa) Baldwin, Betrice Suzette (Sean) Batson, and Ruby Jenee (Dr. Benjamin) Hill, all of Nashville, TN; grandchildren—John E. (Ri’Charda, JD) Baldwin III, Jillian L. (Jordan) Jackson, Sydni J. Hill, Benjamin H. Hill, Jr., and Nathaniel B. Baldwin; brothers and sisters, James E. Baldwin, Sr. of Chattanooga, Evelyn Baldwin Johnson of Ypsilanti, MI, Jewell Baldwin Cousin, Irene Baldwin Chapman, and Marion E. Baldwin, all of Chattanooga, Gilbert (Janice) Baldwin of Ypsilanti MI, and Dr. Carolyn Baldwin (Jesse) Tucker of Nashville, TN; an aunt, Littie M. Fizer of Nashville, TN; and a host of nieces, nephews, and cousins; other relatives and friends. Receiving of friends: Sunday, June 5, 2022, 1-5 p.m. (CST), family will be present from 3-5 p.m. (CST) at Terrell Broady Funeral Home, 3855 Clarksville Pike, Nashville, Tennessee 37218. Wake on June 6, 2022, at 9:30 a.m. (CST) at Jackson Street Church of Christ 1408 Jackson Street Nashville, Tennessee. Funeral service will follow at 10:30 a.m. (CST) at the church. Announced by Taylor Funeral Home of Chattanooga, Inc.

John E. Baldwin, Sr., a native of Chattanooga, departed this life at the age of 87 on Tuesday, May 24, 2022, in Nashville Tennessee. He was a 1952 graduate of Howard High School after which he enlisted in the U. S. Air Force. With twenty years... View Obituary & Service Information

The family of John E. Baldwin Sr. created this Life Tributes page to make it easy to share your memories.

John E. Baldwin, Sr., a native of Chattanooga, departed this...

Send flowers to the Baldwin family.