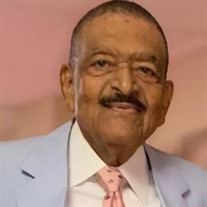 James Lincoln Green, 92, of Chattanooga, peacefully departed this life on Tuesday, February 23, 2021 in a local hospital. He was born in Columbia, Tennessee on September 16, 1928. Affectionately known as “Preacher”, he was the seventh of seven children born to the late Arlelia Jones Greene and Abe L. Greene. He was educated in the Maury County Public School System and attended College Hill Elementary, Junior and Senior High Schools thru the 11th grade. As a part of the boys’ assignment in the high school Shop class beginning in the 11th grade, they helped to build the Carver Smith High School, completed in 1949. James was in the first class to graduate from Carver Smith in 1950. He also was a member of both the football and basketball teams at both schools. Shortly after graduating high school, James was drafted into the U.S. Army and stationed at Fort Jackson, South Carolina. After basic training and non-commission officer school, he taught classes on the 10 basic infantry weapons. In November 1950, his company was shipped to South Korea where he supervised a motor squad in combat on the front line. Within a few weeks, he was transferred to the 51st Fighter Bomber Wing of the Air Force where he served as Platoon sergeant and petroleum, oil and fuel (POF) operator. James supervised thirty South Koreans and an interpreter on this assignment for one year, and then returned to the States for an honorable discharge. James enrolled in the Tennessee State University in 1953 and earned a Bachelor of Science Degree in Business Management and Administration in 1956. He later received a Master’s Degree in Criminal Justice from the University of Tennessee at Chattanooga. James worked at the Monsanto Chemical Company for 4 years and the State of Tennessee in the Department of Corrections for 30 years. He was the first black State of TN officer to work with black youth in the Southeast Region. He began as a trainee and retired as the Regional Director, where he led 105 people in 10 counties of the Southeast Region. He made a positive impact on the lives as a mentor for many youth and frequently saw the fruits of his labor from those showing their appreciation as adults with good jobs and families. In James’ latter years, he continued to have a love for life and stayed very active. He enjoyed planting vegetable gardens, landscaping the yard, repairing old cars and restoring old homes. He was an avid reader and read the newspaper from beginning to end every morning. In addition to his parents, James was preceded in death by his wife of 49 ½ years, Mrs. Bernice Hendrix Green and siblings, Luther Thelma Greene, William David Greene, Abe Henry Greene, Martha Ann Dixon, Amanda Lucinda Greene and Elsie Eula Mai Greene. He leaves to cherish his memory devoted daughter, Gina Lynn Green; sister-in-law, Bobbie J. Hendrix; 7 nieces, Linda Greene, Judy Alderson, Etrulia Dixon, Jacqueline Greene, Suzette Sessoms, Suzanne Crenshaw and Ellen M. Hendrix; 3 nephews, Donald Ray (Teresa) Greene, James Luther Greene and Anthony J. Hendrix; and a host of great nieces, great nephews, cousins, and treasured friends. Reverend Dr. Pedro K. Basden, eulogist. Directions for Live Stream: 1. Go to your Facebook Page 2. Type: taylorfuneralhomeofchattanooga 3. Click 'Like' button 4. Scroll down to view the service at 1:30 p.m.

James Lincoln Green, 92, of Chattanooga, peacefully departed this life on Tuesday, February 23, 2021 in a local hospital. He was born in Columbia, Tennessee on September 16, 1928. Affectionately known as &#8220;Preacher&#8221;, he was the seventh... View Obituary & Service Information

The family of James Lincoln Green created this Life Tributes page to make it easy to share your memories.

Send flowers to the Green family.