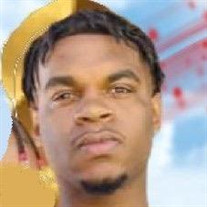 Jailen Donyelle Moore Wofford, 21, of Chattanooga, passed away Saturday, September 25, 2021. He was a star athlete in basketball and football at Brainerd High School and graduated in 2018. He was preceded in death by his grandfather, Charles... View Obituary & Service Information

The family of Jailen Donyelle Moore Wofford created this Life Tributes page to make it easy to share your memories.

Send flowers to the Wofford family.