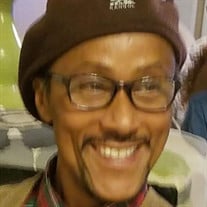 Amos &#8220;PeRunie&#8221; Copeny, Sr., 63, of Chattanooga, passed away Wednesday, February 5, 2020 at his residence. He received his equivalency diploma in May 18, 1993. He was employed with Trojan Labor as a construction worker. Amos was... View Obituary & Service Information

The family of Amos Copeny created this Life Tributes page to make it easy to share your memories.

Send flowers to the Copeny family.