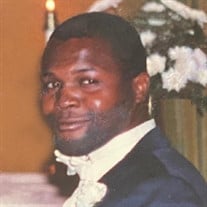 William Henry Jackson, 56, of Chattanooga, passed away Friday, October 15, 2021, at his residence. He was formerly employed by Chattanooga Tent Company. He was preceded in death by his mother, Lillie Pearl Jackson; brothers, Willie Jackson,... View Obituary & Service Information

The family of William Henry Jackson created this Life Tributes page to make it easy to share your memories.

Send flowers to the Jackson family.