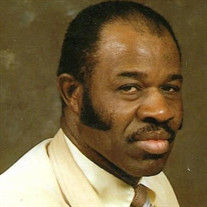 Bishop Sims Bledsoe, Sr., 88, of Chattanooga, passed away Thursday, February 10, 2022, at his residence. He accepted Jesus Christ as his personal Lord & Savior, at an early age. He attended Giles County Schools in Pulaski, Tennessee. After which, he served in the United States Army from 1950-1954. He fought in the Korean War. His rank was Staff Sargent. He was also an Amateur Boxer in the Army. In 1954, he married Gertie Perkins of Pulaski, Tennessee and to this union 6 children were born Ruth Ann, Bonnie Kaye, Mary Magdalene, Sims Jr., Andre Denise, and Antonio Sereginald. Sims traveled throughout Indiana conducting Revivals, preaching Jesus, teaching Bible Studies, Evangelized, and helped plant many churches throughout Indiana. Sims later married Addie Beatrice in 1966 and to this union no children were born. He relocated to Chattanooga and was a committed member of the Church of JES-US, where he served for over 56 years as "Bishop "of the church and many fondly called him “Bishop”. He was always helping others and ministering throughout Tennessee and Georgia. No one really knows how many lives that he touched in a positive way, just by sharing his time, wisdom and the love of Jesus. After the death of Addie in January 1987, he married Edith Ruth Burney on April 24, 1987. He served on the Board of Directors of the Mental Health Department Aim-Center. He was a member of The Clergy Koinonia and he was a Chaplain for the Cherokee Woods Community. "Bishop" was a very fun and loving person and he used to clown with folks. He was also a business man. Bishop had a radiant smile and infectious laugh that would bring joy to any situation. Bishop was a big tall man with a deep voice that commanded your attention, when he spoke. He had a personality larger than life itself. But when it came to the Bible, he didn't play, as he was very serious about the Word of God and indeed, he loved Jesus! Sims was preceded in death by his parents; two brothers, James Bledsoe and Joseph Bledsoe-Muhammad; two daughters, Bonnie Kaye Bledsoe Burney and Sharon Burney, and one son, Antonio Bledsoe; one granddaughter, Andre Bledsoe; mother-in-law, Rosa Lee Williams; brothers-in-law, James R. Williams, George E. Williams, and Dr. AD Williams; and sister-in-law, Geneva Williams. His loving wife Edith, of nearly 35 years, joined him in glory on February 14, 2022 (4 days after he passed on). He leaves to cherish his memory, his brothers, Horace Bledsoe of Indianapolis, IN and Morris (Jean) Bledsoe of Grand Rapids, MI; two sisters-in-law, Elta Bledsoe of Murfreesboro, TN and Virginia Bledsoe Muhammad of Indianapolis, IN; children: daughters, Ruth Ann Bledsoe Carlisle, Mary Bledsoe (Alan) Bacon, Sr., Andre Bledsoe Fall, all of Indianapolis, IN, Pamela Burney Higgenbotham, Angela Burney Cuff of Georgia; sons, Sims Bledsoe, Jr,, Leon (Pat) Edwards all of Indianapolis, IN, and Joshua (Francis) Burney II of Chattanooga, TN; grandsons: Joshua (Tamiko) Burney III, of Chattanooga, TN, Demond Harris, Alan Bacon, Jr., Sims Bledsoe Ill, S-ven Carlisle, all of Indianapolis, IN, and Jimmy Townsend of Georgia, granddaughters: Andreana Franklin, Karen Bledsoe, Dimples Bledsoe, Nyesha Bledsoe, Brianna Bledsoe, of Indianapolis, IN, Lois Burney (Harold) Moss of Lilburn, GA, Eunice Burney (Rodney) Brown of Chattanooga, TN, and Antionette Bledsoe of Las Vegas, NV; 29 great-grandkids; 28 great-great-grandkids, cousins; nieces, nephews, Godchildren and a host of dear relatives and friends. Elder Alan Bacon, Sr. will be the eulogist. A private burial will take place in the Chattanooga National Cemetery. Directions to Live Stream: 1. Go to your Facebook Page 2. Type: taylorfuneralhomeofchattanooga 3. Click 'Like' or Thumbs Up 4. Scroll down to view the service

Bishop Sims Bledsoe, Sr., 88, of Chattanooga, passed away Thursday, February 10, 2022, at his residence. He accepted Jesus Christ as his personal Lord & Savior, at an early age. He attended Giles County Schools in Pulaski, Tennessee. After which,... View Obituary & Service Information

The family of Sims Bledsoe, Sr. created this Life Tributes page to make it easy to share your memories.

Send flowers to the Bledsoe, family.