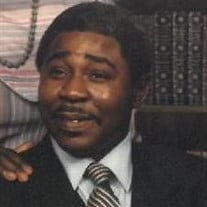 Samuel Pierce, Sr., 71, of Chattanooga, passed away Sunday, January 26, 2020 in a healthcare facility. He attended Riverside High School. He was a member of Mt Canaan Baptist Church. He was preceded in death by his son, Samuel Pierce, Jr.;... View Obituary & Service Information

The family of Samuel Pierce, Sr. created this Life Tributes page to make it easy to share your memories.

Send flowers to the Pierce, family.