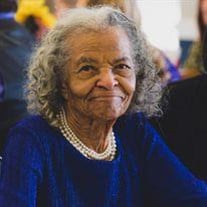 Ruby Mae Holliday Dees, 96, of Chattanooga, passed away Friday, August 27, 2021, at her residence. She was born May 22, 1925 in Sulligent, Alabama. She was the only daughter of Knox Holliday and Isabelle Henry Holliday. Ruby and her three brothers were raised by their widowed father. She graduated from Alabama A&M University receiving a BS in Secondary Education. She married Bennon Dees on November 26, 1953. They made their home first in Huntsville, AL and later moved to Chattanooga. Their marriage produced three children. Ruby had 10 grandchildren, 21 great grandchildren, and a beloved goddaughter. Ruby taught in the Chattanooga Public School System for 29 years. Majority of those years were at Howard School teaching at the High School, Junior High, and Elementary levels. The last three years were spent at Eastlake Elementary School. While teaching at Howard School Ruby was a Girl Scout leader, devoting several years to helping girls in the school and the community. Outside the school environment, she continued to be active in the lives of her young students. She raised her own three children, and several others were welcomed into her home as if they were her own. Ruby was often recognized by former students who stopped to greet her with fond memories of how she affected their lives. Until declining health, Ruby attended Phillips Temple CME Church where she was a faithful and active member for many years. She was also a lifetime member of the local chapter of Sigma Gamma Rho Sorority. She was active in the Senior Neighbor’s Program, the Glenwood Community Center and in neighborhood activities. She taught ceramic classes at Carver Community Center. Ruby is preceded in death by both parents, Knox and Isabella; husband, Bennon; brothers, Henry Lee and Alvertis Holliday. Survivors include her children, Gwendolyn (Clyde) Senviel of Knoxville, TN, Lawrence (Sylvia) Dees, and Secondra Meadows, both of Chattanooga; brother, Oscar (Totsie) Holliday, Sr. of Dayton, OH; Goddaughter, Roberta Moon, her grandchildren and great- grandchildren; a host of other relatives and friends. Reverend Robert Henry of Phillips Temple CME Church will be officiating. Memorials may be given to Hospice of Chattanooga. Directions to Live Stream: 1 - Go to your Facebook page 2 - Type: taylorfuneralhomeofchattanooga 3. Click 'Like' Thumbs Up 4. Scroll down at 12 noon to view the service.

Ruby Mae Holliday Dees, 96, of Chattanooga, passed away Friday, August 27, 2021, at her residence. She was born May 22, 1925 in Sulligent, Alabama. She was the only daughter of Knox Holliday and Isabelle Henry Holliday. Ruby and her three brothers... View Obituary & Service Information

The family of Ruby Mae Holliday Dees created this Life Tributes page to make it easy to share your memories.

Send flowers to the Dees family.