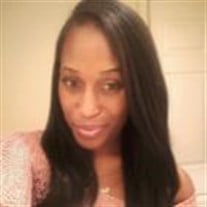 Rakia Shana Smith-Watkins, 34, formerly of Chattanooga, passed away Tuesday, August 17, 2021, at her Lithonia, Georgia residence. She attended Tyner High School where she was a cheerleader, on the Dance team, and a RAM Majorette. She graduated... View Obituary & Service Information

The family of Rakia Shana Smith-Watkins created this Life Tributes page to make it easy to share your memories.

Send flowers to the Smith-Watkins family.