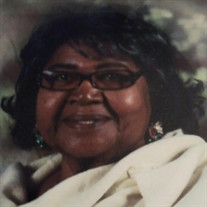 Omelia Flemister, 87, of Chattanooga, passed away Wednesday, May 26, 2021 at her residence. She was born in Charleston, WV, graduated high school in Detroit, Michigan in 1952. The family moved to Chattanooga, Tennessee in 1963. Omelia worked... View Obituary & Service Information

The family of Omelia Flemister created this Life Tributes page to make it easy to share your memories.

Send flowers to the Flemister family.