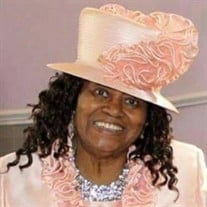 Mother Virginia Scott, 83, of Chattanooga, passed away Sunday, January 17, 2021 in a local hospital. She was born Virginia Washington to the union of Elder Frank and Zenobia Washington in Sidon, Mississippi. She was the second oldest of 10 children. She was saved at an early and filled with the Holy Spirit at the tender age of 10. Even from her youth, she was a witness for her family, friends and classmates. She often told of being teased for being saved, but later those that teased her would watch her and later accept Christ. Being the eldest daughter, she was often needed to help take care of her younger siblings. She often talked about helping her mom and the nurse midwife with the delivery of her younger siblings. At the age of 15, she met the young James M. Scott who had already been called into the ministry. In 1954, at the age of 17, they were married. A short time after being married, the Lord led this young couple to Chattanooga, Tennessee. She and Bishop joined Holy Temple Church of God in Christ in 1956 under the leadership of Elder Pinkard. The following year in June of 1957 and at the young age of 19, she became a First Lady after God elevated her husband to the position of Pastor. To this union God added four children: The late Elder James Scott, Jr., Sis. Zenobia Norman, Elder Mark Scott and Missionary Lotneice Hinton. Mother Scott began working in the church in her youth, where she could often be found singing, working with the youth, teaching Sunday School, selling dinners and even playing her drum for the outreach street ministry. She has worn many hats in the local church, district and even state where she held several positions over the years. When her husband was away, she picked up many of the saints for church and carried them home as well, sometimes not getting home until after midnight with four children in tow! A great example in the home, she taught her children the scriptures and often made them sing gospel songs while she hit a tune on the piano. She served her husband with joy, raised her children with purpose and loved on all of God’s children. When asked for advice on how to be an effective Pastor’s Wife, she would always say, "Just love all of the people the same!" Outside of the home, she worked and took care of Carl and Nancy Fischer. Since the couple had no children, they were very dependent on her and she was the trustworthy and gentle spirit they needed. She remained with them for nearly 19 years until both passed away. Over the years, Mother Scott was the sweet and steady fragrance at Holy Temple. She remained faithful to God, her family and the church. She always had a kind word and often reached out to the saints via phone when they needed encouraging. Her signature song was and remains "Will You Reach Me A Hand of Kindness!" She was a First Lady for nearly 64 years and her legacy is now extended through her 3 surviving children, her 7 grandchildren and now even her 4 great grandchildren...and the many lives that she has touch with her love and beautiful spirit. Her son, Elder Mark Scott will be the eulogist.

Mother Virginia Scott, 83, of Chattanooga, passed away Sunday, January 17, 2021 in a local hospital. She was born Virginia Washington to the union of Elder Frank and Zenobia Washington in Sidon, Mississippi. She was the second oldest of 10... View Obituary & Service Information

The family of Mother Virginia Scott created this Life Tributes page to make it easy to share your memories.