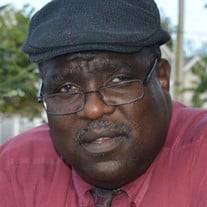 Michael Lebron Norman, Sr., 60, of Chattanooga, passed away Monday, June 21, 2021 in a local hospital. He was a 1980 graduate of Howard High School. Michael was an Environmental Services Manager at Erlanger Hospital and was also a Supervisor... View Obituary & Service Information

The family of Michael LeBron Norman, Sr. created this Life Tributes page to make it easy to share your memories.

Send flowers to the Norman, family.