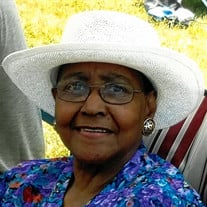 Louise (Pinkard) Montgomery Arnold, 80, of Chattanooga, went home to be with the Lord on Sunday, January 19, 2020. She was a graduate of Howard High School and retired from Uniform Rental Services. Louise served for 10 years as a devoted volunteer... View Obituary & Service Information

The family of Louise (Pinkard) Montgomery Arnold created this Life Tributes page to make it easy to share your memories.

Send flowers to the Arnold family.