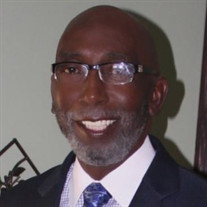 Lee Edward Barrett, of Hampton, Virginia, was born January 22, 1951 in Chattanooga Tennessee. He went to be with our Lord and Savior Jesus Christ on Saturday, December 11, 2021. Lee accepted Christ at a young age and in his own words “returned to God and Church,” when he united with New Hope Baptist Church, Hampton, VA, under the pastorate of Dr. Christopher C. Carter, Sr. There, he was an active member and served on the Greeters Ministry. He was educated in the Chattanooga Public Schools and a member of the Riverside Class of 1968. Lee matriculated at Knoxville College, Knoxville, TN, majoring in Sociology and becoming a member of Kappa Alpha Psi Fraternity, Inc. RMC (SW) Lee Barrett served in the United States Navy for more than 22 years, retiring in 1997. During his tenure he received many medals, honors, and commendations. He was especially proud of the time he spent recruiting in the Chattanooga area. Lee worked an additional 15 years and retired from the United States Postal Service. After which he volunteered with VA Medical Center, Hampton. Throughout his life, Lee worked hard and loved hard. He had a tender heart, a passion for people, a great sense of humor, and never met a stranger. Lee was preceded in death by his mother, Dorothy Winbush; stepfather, Eddie Winbush Sr.; and his brother, Eddie Winbush Jr. He is survived by his wife of 37 years, Alva Trimble Barrett, daughters Carmen A. Taylor, Yolanda Nicole Barrett, and Lea Chanel Barrett; a sister, Connie Alfred; brother, Jimmy Winbush; grandchildren, Jeremy and Quinton Taylor; nephews, Nicholas Alfred Jr., and Edrius Puttman; a niece, Ebony Winbush; lifelong friends, George Scott, Jr. and Theopria Leatherwood and a host of other relatives and friends.

Lee Edward Barrett, of Hampton, Virginia, was born January 22, 1951 in Chattanooga Tennessee. He went to be with our Lord and Savior Jesus Christ on Saturday, December 11, 2021. Lee accepted Christ at a young age and in his own words &#8220;returned... View Obituary & Service Information

The family of Mr. Lee Edward Barrett created this Life Tributes page to make it easy to share your memories.

Send flowers to the Barrett family.