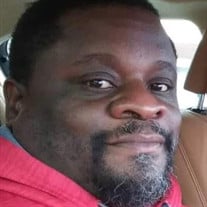 Leavon Lenard Thrasher, 53, formerly of Chattanooga, passed away Friday, August 20, 2021 in a Snellville, Georgia hospital. He was a 1986 graduate of City High School and later attended DeVry Technical Institute. He was a member of Berean Christian... View Obituary & Service Information

The family of Leavon Lenard Thrasher created this Life Tributes page to make it easy to share your memories.

Send flowers to the Thrasher family.