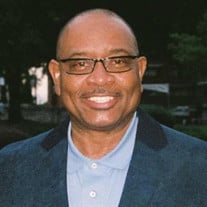 Lawrence Henry Eugene Newbell, 64, of Lebanon, passed away Thursday, December 10, 2020 in a Hendersonville hospital after a short illness. He was born October 22, 1956 to Ruby Lillian Newbell and Rousseau Brown, Sr. in Gallatin, Tennessee. He received Christ as Savior at an early age. Lawrence received his early education at Union Elementary, Union High, and graduated from Gallatin High School in 1974. He later attended Fisk University, where he received a Dual Bachelor’s degree in Business and Economics. He was a part of the Men’s Basketball team. Lawrence was united in holy matrimony to Teresa Ann Clay and to this union two children were born. Lawrence was employed at RR Donnelly for 26 years and then started employment with Berry Global in 2001 and was currently employed there. He was a joyful person and willing to help others, at all times. Lawrence loved playing basketball, tennis, and softball. He was preceded in death by his wife; mother; father; brother, George Lee Newbell; grandparents, Mamie Ulalia and Eli Newbell. Survivors include a devoted son, Jonathan Newbell of Nashville, TN; one devoted daughter, Cassandra Newbell of Lebanon, TN; two brothers, David Humphrey and Rousseau Brown, Jr., both of Gallatin, TN; one sister, Angela (Michael) Fitts of Gallatin, TN; two brothers-in-law, Maurice (Sanjeanetta) Clay, Tyrone (Alicia) Clay, both of Gallatin, TN; a devoted family member cousin/sister, Eula Fitts; a host of nieces; nephews; cousins; many, many more endearing relatives, friends, and acquaintances. Arrangements are by Taylor Funeral Home of Chattanooga, Inc. Directions for Live Stream: 1. Go to your Facebook page 2. Type taylorfuneralhomeofchattanooga 3. Click 'Like' 4. Scroll down to view the service at 12 noon (CST.)

The family of Lawrence Henry Eugene Newbell created this Life Tributes page to make it easy to share your memories.

Send flowers to the Newbell family.