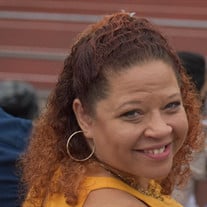 Hollie Eva Marie Isaac, 43, of Chattanooga, peacefully entered God’s eternal grace on Saturday, September 25, 2021 surrounded by her loved ones, in a local hospital. She was born from the parents of James Hugh and Shirley Roark, on December 15, 1977, in Detroit, Michigan. During her young teenage years, her parents moved their family down to Orlando, Florida. While living in Florida, she attended South Orlando Seventh Day Adventist Church, and faithfully served as a Pathfinder. While attending South Orlando SDA, she met and fell in love with her beloved husband, Daniel. In 1996, she graduated from her alma mater Oak Ridge High School. Hollie and Daniel married a year later and began the journey of marriage and parenthood with the birth of their first daughter, Jazmine. Hollie’s faith and devotion to the church grew as she became more involved at South Orlando. For several years she was a Women Ministries Leader and church secretary. Along with her husband, she served as a Family life ministries leader and Adventure Leader. After the birth of her children, Hollie became a beloved and loving mother. She also became a member of the PTA at the schools where her children attended. Hollie dedicated her time, attending every school function which included plays, orchestra concert, band concert, choir concert, swim meets, soccer, baseball, wrestling, and all football games, being her children’s #1 cheerleader. In 2013, Hollie and her family moved to Chattanooga, TN where she became a Food Service Manager for Ooltewah High School and attended Hamilton Community Church. While in Chattanooga, Hollie extended her role as Mom, by becoming a CIEE coordinator for the US, where she placed foreign exchange students in loving homes including her own. She was a host mom to two daughters, German exchange student Emma, Italian student Luli and a Spanish son Marcos, whom she loved and treated as her own. Hollie is survived by her loving husband, Daniel, her 4 beautiful children, two daughters, Jazmine, and Elizabeth, two sons, Chris & Elijah; daughter-in-law, Kara and son-in-law, Jai; her favorite grandsons, Benjamin, and Corbin; brothers, Larry, Kelly, and Jamie, as well as other family and friends who knew and loved her. Pastor Dave Ketelsen will serve as the eulogist.

Hollie Eva Marie Isaac, 43, of Chattanooga, peacefully entered God&#8217;s eternal grace on Saturday, September 25, 2021 surrounded by her loved ones, in a local hospital. She was born from the parents of James Hugh and Shirley Roark, on December... View Obituary & Service Information

The family of Hollie Isaac created this Life Tributes page to make it easy to share your memories.

Send flowers to the Isaac family.