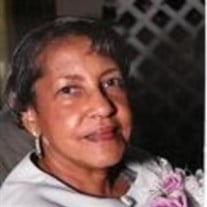 Geraldine Jackson Sanders, 87, was born September 27, 1932 to the union of Leonard Jackson, Sr. and Kitty Ruth Andrews Jackson, surrounded by family transition peacefully at her residence on June 5, 2020. She was baptized at an early age at... View Obituary & Service Information

The family of Geraldine J. Sanders created this Life Tributes page to make it easy to share your memories.

Send flowers to the Sanders family.