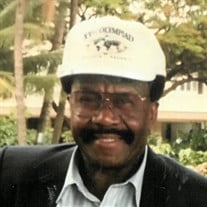 George Thompson, Sr., 82, of Chattanooga, passed away Tuesday, September 14, 2021 in a local hospital. He was a member of Hawkinsville Baptist Church. He retired from T.U. Parks Construction after 35 years of service. George was preceded in... View Obituary & Service Information

The family of George Thompson, Sr. created this Life Tributes page to make it easy to share your memories.

Send flowers to the Thompson, family.