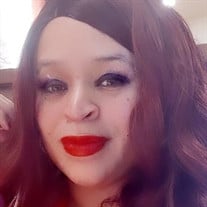 GeLissa Eugenia Toney, 28, of Chattanooga, passed away Thursday, December 24, 2021, in a local hospital. She was a 2012 graduate of Brainerd High School. Gelissa later went on to attend MTSU. She was a member of Union Hill Missionary Baptist... View Obituary & Service Information

The family of GeLissa Eugenia Toney created this Life Tributes page to make it easy to share your memories.

Send flowers to the Toney family.