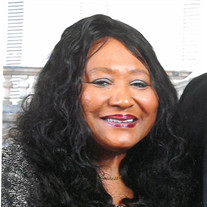 Frances E. Readus, 74, of Chattanooga, passed away unexpectedly on March 1, 2022. Known previously by her maiden name, Frances Dowdell, Mrs. Readus grew up in Chattanooga, then at 18 joined the United States Army where she proudly served from 1965 until she was honorably discharged in 1968. In 1980 she moved to Los Angeles, CA where she successfully handled bookkeeping responsibilities for a private medical practice, while also raising her daughter as a single parent. Then, she returned to Chattanooga in 1994 to aid in the care of her mother, Willie Mae Hawkins, who succumbed to cancer in 1995. Her love for serving others was always at the forefront of her mind throughout her life, and after returning to Chattanooga, she resumed working in the healthcare sector until she retired from CIGNA Healthcare in 2013. She married the love of her life, Bernard Readus, on October 16, 2018, and he lovingly accepted her daughter as his own. The story of their romance didn’t start in 2018, however, it began when they were both in their 20’s, when they dated briefly. Having reconnected at a Howard High School reunion back in 2007, the two became inseparable and have remained best friends and confidants throughout their marriage and until Frances’ last breath. A local celebrity, Mrs. Readus enjoyed sharing stories of the time when she modeled for Jet Magazine, a lifestyle magazine well-known and adored by the African-American community. She enjoyed getting dressed up and receiving compliments that she did not look her age. Even at 74, she could easily be mistaken for a woman in her 50s. She loved that. Frances will be dearly missed and always remembered. Frances was predeceased by her mother, Willie Mae Hawkins and her father, Till Dowdell. She is survived by her husband, Bernard Readus; daughter, Sommer (Shana) Dowdell-King; stepson, Chad (Rebecca) Readus; stepdaughter, Leandra Lloyd; stepson, Daryl Collier; brother, James (Debra) Hawkins; niece, Erin; sisters-in-law, JoAnn Cooper, Evelyn (John) Moore, and Zebedee Williams; niece, Franchesca; 5 grandchildren; 2 great-grandchildren; cousins, the loving Readus family, her dearest friends, Rose Prather, Uretha Shropshire, and countless others who will forever cherish the time spent with Frances. Her joyous spirit, infectious smile and timeless beauty will remain forever etched in our memories. Brother John R. Taylor, Sr. will serve as the eulogist.

Frances E. Readus, 74, of Chattanooga, passed away unexpectedly on March 1, 2022. Known previously by her maiden name, Frances Dowdell, Mrs. Readus grew up in Chattanooga, then at 18 joined the United States Army where she proudly served from... View Obituary & Service Information

The family of Frances Elizabeth Readus created this Life Tributes page to make it easy to share your memories.

Send flowers to the Readus family.