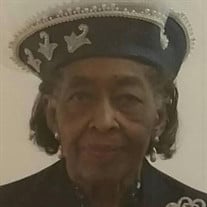 “Passing out of the shadow into a purer light; stepping behind the curtain, getting a clearer sight; passing out of the shadow into eternal day—why do we call it dying, this sweet going away!" Our earthly loss was Heaven’s gain early Monday morning, February 1, 2021, when our dear and beloved mother, Mrs. Elizabeth Knowles Trimble was called home following a brief illness. She was born on August 31, 1927 in Menlo GA. She was the oldest of seven children born to John David Knowles Sr. and Tessie Mae Mack Knowles. She graduated as Salutatorian of Hill High School in Lafayette GA in 1948 and was joined in holy matrimony with Samuel Trimble on September 30, 1950. The couple relocated to Chattanooga TN in 1955, where she worked on both Lookout and Signal Mountains until the late 1960s. Mrs. Trimble worked with the Community Action Program from 1966 until 1969. She joined the TN Department of Human Services in 1970 where she served with acumen and alacrity quickly earning the respect and admiration of colleagues and superiors for the quality of her work; she retired in 1989 and focused on the dress shop (R&T Enterprise) she and her daughter Rita had opened in 1982. The dress shop was renamed “Smart Girl" in 1983 and remained open until 1992. Always an advocate for children, Mrs. Trimble served as president of the Parent Teacher’s Association for several years at Chattanooga Avenue Elementary School, Howard Elementary School, and Howard Junior High School. While her children were of school age, she served as a homeroom mother and as a leader of the Girl Scouts; she also worked with the Boy Scouts of America where she was a Den Mother. She was actively involved in youth ministry for more than 60 years. She has not only ministered to young people within the church but also in the community and has been a tremendous influence in the lives of people who are now doctors, lawyers, ministers, police officers, teachers, administrators, and laborers. A faithful member of the Union Hill Missionary Baptist Church since 1958 she was involved in numerous church committees, ministries and auxiliaries, she was a member of the first Board of Directors of Union Hill and an instrumental figure in its relocation to its present location. She was a member of the Someone-to-Care Ministry, she sang in the Senior and Combined Choirs and worked with various Youth Ministries within the church, including supervisor of the Youth Choir and the Youth Usher Board, the Red Circle, and the Sunshine Band. She supervised the Arts and Crafts program during Vacation Bible School for several years until her health prevented her from doing so. Preceded in death by her parents, four brothers, John D., Hardy T., and Jose A. Knowles and Nathan C. Jones; one sister Eliza Ella Sanford, two grandsons, Justin L. and Shawn E. Trimble; and a beloved aunt, Jerrell D. Hudgins; those left to remember her with happiness and love are four daughters, Rita M. Trimble Turner, Janice F. Trimble (J.T.) McDaniel, Sandra L Trimble, of Chattanooga TN, and Alva G. Trimble (Lee) Barrett of Hampton VA; three sons, Steve P. Trimble of Ringgold GA; Rodney M. (Sonya), and Stephon K. Trimble of Chattanooga TN; fifteen grandchildren, Norquitta Trimble, Stephanie Trimble (Tim) Baker, Tiffanie Monique Trimble, Jerphon Trimble, Gabriel Chafee Owens Dunn, Tia Cherrelle Reed, Cadarius (Porchia) and Ladarius Trimble, and Quincy Trimble, all of Chattanooga TN; Torrey Trimble, Sandy Springs GA, Lea Barrett, Hampton VA, Toi (Kenneth) Smith, Atlanta GA, Alphonso Trimble, Ringgold GA, Ebony McKenzie, Knoxville TN, Kimberly Johnson Shelling, Groveland FL, and Jamichael Trimble, Houston TX; one sister, Jerrel Dean Knowles, Atlanta GA; one brother-in-law Harmon (JP) Wooten, Atlanta GA; a daughter-in-law, Lynne Johnson Trimble; and special friends Justine Bush Jones, Janie McDuffie, Minnie Blanks; twenty-nine great-grandchildren, two great-great-grandchildren and a multitude of other relatives and friends. She was called “Grannie” not only by her grandchildren, but by many of the adults who were raised in the Union Hill Missionary Baptist Church as well as those in the South Chattanooga area where she lived for many years. Pastor Samuel Jackson will serve as the eulogist. Directions for Live Stream: 1. Go to your Facebook page 2. Type: taylorfuneralhomeofchattanooga 3. Click 'Like' 4. Scroll down to view the service at 12 noon.

The family of Elizabeth Trimble created this Life Tributes page to make it easy to share your memories.

“Passing out of the shadow into a purer light; stepping behind...

Send flowers to the Trimble family.