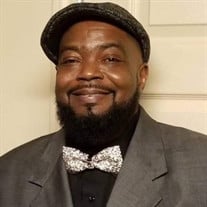 Charles Westley Russell, Sr., 54, of Chattanooga, passed away Wednesday, February 9, 2022, at his residence. He was a graduate of Tyner High School and attended the University of Tennessee at Knoxville where he became a member of Phi Beta Sigma... View Obituary & Service Information

The family of Charles Westley Russell, Sr. created this Life Tributes page to make it easy to share your memories.

Send flowers to the Russell, family.