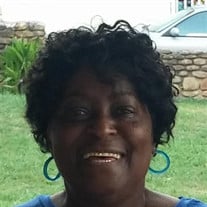 Carolyn &#8220;Frosty&#8221; Alexander, 68, of Chattanooga, passed away peacefully and went to be with the Lord on Monday, October 11, 2021, at her residence. She was a 1970 graduate of Howard High School and later attended McKenzie College.... View Obituary & Service Information

The family of Carolyn “Frosty” Alexander created this Life Tributes page to make it easy to share your memories.

Send flowers to the Alexander family.