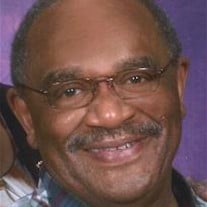 United States Marine Corps Sergeant, Calvin Leon Bush, Sr., 75, passed away Saturday, February 8, 2020 in a local hospital. Calvin, affectionately known as “Chubby”, was a native of Buffalo, NY, by the grace of God spent most of his life in Chattanooga where he met his soulmate. He was a 1962 graduate of Howard High School. He was a veteran of the USMC, being made a Marine at MCRD Parris Island. He was preceded in death by his son, Marcus Bush; parents, S.T. and Lavada Bush; and brother, Sam Bush. Survivors include his wife of 55 years, Jacqueline Bush; son, Calvin Bush, Jr.; daughter, Sonya (Marvin) Harris; grandson, Brian (Mauriel) Bush; granddaughter, Ashley (Chris) Studaway; great-grandchild/bestfriend, Carter Studaway, all of Chattanooga; brothers, Harold Bush of Chattanooga and Elston (Reba) Bush of Buffalo, NY; sisters, Barbara (Charles) Jemison of Buffalo, Beverly Scott, and Rosalyn (James) Carthen, both of Chattanooga; aunt, Dorothy Woods of Huntsville, AL; a host of nieces, nephews; cousins; other relatives and friends. To those left to miss his presence understand that shared grief lightens the load, we are so thankful for the time we were able to share. Semper Fidelis. Visitation is Thursday, February 13, 2020 from 6-8 p.m. at Taylor Funeral Home. Funeral service will be Friday, February 14, 2020 at 1 p.m. in the chapel with Rodney Scott and Greg Beasley giving words of comfort. Burial in Chattanooga National Cemetery.

The family of Calvin Leon Bush Sr. created this Life Tributes page to make it easy to share your memories.

Send flowers to the Bush family.