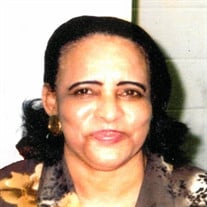 Brenda Joyce Harris, 77, of Chattanooga, passed away Monday, February 15, 2021 in a local hospital. She was born August 13, 1943 in Chattanooga, Tennessee to the parents of Jewel Hardaway Choice and Floyd Myers, Sr. She attended Howard High... View Obituary & Service Information

The family of Brenda Joyce Harris created this Life Tributes page to make it easy to share your memories.

Send flowers to the Harris family.