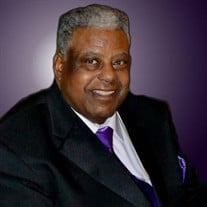 Bishop James M. Scott, Sr., 87, of Chattanooga, passed away Monday, January 18, 2021 in a local hospital. He was born in Pickens, Mississippi on November 29, 1933 to the blessed union of the Elder Matthew and Melissa Reed Scott. The sixth of ten children, he was saved at a very young age. At the age of 14, he lost his father and pastor, but shortly after, he was called into the ministry. A born leader, his life was exemplary for others even in his youth. As a young adult, he remained at home with his mother and younger siblings, in an effort to assist her with the family farm. This decision did not allow him to go to college, but he was able to train the younger siblings to safely operate the necessary farm equipment. He would work his mother’s land and then work his land. In 1954, he married his beautiful bride, Virginia Washington. Shortly after marrying, God led the young couple to Chattanooga in 1956 where they joined Holy Temple Church of God in Christ. This move was clearly ordained by God, and in 1957, he was appointed pastor of the Holy Temple Church by Bishop Audley King. He worked 10 years for Preserving Wood for $40 a week, but was able to take care of his family, the church and even build his first home. He told his children, “your money will do whatever you tell it to do.” Eventually he was able to get his GED and become a contractor. Meanwhile, God also blessed this union, and added four children…the late Elder James, Jr., Zenobia Norman, Elder Mark Scott and Lotneice Hinton, along with seven grandchildren and four great grandchildren. Bishop Scott has remained committed to God, and served his family, his church and his leaders faithfully. He has held various positions in the jurisdiction including President of the State Sunday School Department, Chairman of the Ordination Board, Member of the Finance Committee and District Superintendent. And in 1996, God elevated him to Bishop of the Tennessee Eastern Second Jurisdiction. As a gifted leader, Bishop Scott knows how to reach and serve the youth, the elderly and all of those in between. He was a great teacher for young men, often telling them how to be effective husbands and fathers. He used his gifts to shepherd God’s people and his talent and vision to edify the church. He has been credited with the construction and renovation of countless churches throughout the eastern part of Tennessee where he has left his footprints. He was also responsible for the former and most recent construction of The New Holy Temple Cathedral COGIC at 2311 Bliss Avenue. It is a beautiful edifice that also functions as the State Temple. A kind-hearted and generous person, his leadership style allowed all people an opportunity to blossom. His commitment to Christ and deep love for God’s people has thus sustained him as pastor of The New Holy Temple Cathedral Church of God in Christ for nearly 64 years. And it is there where he leaves his legacy through the many lives he touched, leaders he groomed and the family he enriched! His son, Elder Mark Scott will be the eulogist.

Bishop James M. Scott, Sr., 87, of Chattanooga, passed away Monday, January 18, 2021 in a local hospital. He was born in Pickens, Mississippi on November 29, 1933 to the blessed union of the Elder Matthew and Melissa Reed Scott. The sixth... View Obituary & Service Information

The family of Bishop James M. Scott Sr. created this Life Tributes page to make it easy to share your memories.