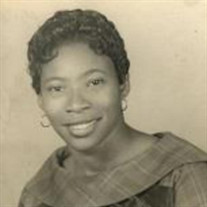 Barbara Ann Slaughter Pride, 83, of Chattanooga, passed away Thursday, January 21, 2021 in the Hospice Care Center. She was a member of Mt. Joy Baptist Church, where she served as a Deaconness. She retired from Hamilton County Nursing Home... View Obituary & Service Information

The family of Barbara Ann Slaughter Pride created this Life Tributes page to make it easy to share your memories.

Send flowers to the Pride family.