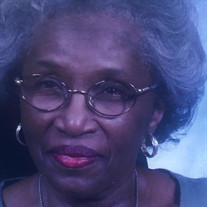 Alice Marie Baker Spence, formerly of Chattanooga, departed this earthly realm on January 19, 2022, in Memphis, Tennessee. She was born December 29, 1932, in Rocky Face, Georgia. Upon death, Alice was reunited on the celestial shores of heaven with her husband, Robert Langston James Spence, Sr., with whom she had a blessed union of 57 years until his death on January 14, 2012. She is now also with their daughter, Dr. Fannie Spence Leake, who preceded her in death on October 16, 2008, along with two grandchildren, Paul and Mary Alice Evans. Five surviving children feel blessed to have had her in their lives as the matriarch for more than the "three score and ten" we are promised. In this time, she lived a life dedicated to her children, grandchildren, and great-grandchildren. Alice Spence was a spiritual woman who led by example and gave her children a strong religious foundation rooted in the teachings of Jesus. She was a lifelong member of St. John Baptist Church in Chattanooga, primarily under the guidance of her father-in-law Reverend Samuel R. Spence. Upon moving to Memphis in 2006, she joined Mississippi Boulevard Christian Church, where she studied under Rev. Dr. Frank A. Thomas and Rev. Dr. J. Lawrence Turner. She made it her life’s work to ensure that each of her children was educated, fervently believing that education was the key to a better life. All her decisions, along with those of her husband Robert, were based on achieving that goal. As a result, she was proud to share that all her children have college degrees with five of them having advanced degrees. Alice attended Spelman College for two years and later attended Chattanooga State Technical College, graduating in 1971 with a degree in computer science. She spent 25 years working for the City of Chattanooga, first as a Systems Analyst and then as the Assistant Administrator of Human Resources, until her retirement in 1998. Her life of service to her family is exemplified through the care and support she provided them throughout the years, especially during times of physical and emotional distress. There are many notable examples of her selfless acts made on behalf of her children and grandchildren; however, three that stand out most involve the support she provided her daughters during life-altering challenges; from the loss of infant children to a post-natal emergency, to a terrible, life-ending cancer battle, she offered strength, companionship, and unconditional love. In 2000, she stepped in the gap to help rear one of her granddaughters as a daughter healed. Until the day Alice left this life, she never wavered from these types of commitments to her family, which defined her life. To her grandchildren, she was affectionately known as “Grandma Nu,” a reference to having spent most of her adult life in Chattanooga. Alice had an insatiable thirst for knowledge and spent her life educating herself on various topics and issues. To fulfill her lifelong dream of becoming a college graduate she returned to college at 70 years of age and graduated from the University of Tennessee at Chattanooga in 2004 with a Bachelors in Sociology. Upon graduating, she was able to achieve another one of her lifelong goals when she was initiated into the Beta Epsilon Omega Chapter of Alpha Kappa Alpha in 2005. Alice Spence was the oldest of six children born to Clara and Earven Baker, Sr., who both preceded her in death along with a sister, Charlotte Baker, and brothers Earven Baker, Jr. and Melvin Baker, as well as a stepson and stepdaughter. Left to cherish the memories of their beloved mother are Harold (Cindy) Spence (of Atlanta, GA), Paula Spence-Evans, Robert (Dorchelle) Spence, Rhonda Spence (all of Memphis, TN), and Reginald Spence (of Baltimore, MD) as well as one surviving stepdaughter, Rosalyn Spence (of Chattanooga, TN). She is also survived by 19 grandchildren; 16 great-grandchildren; one sister: Mable Holmes, and one brother: Charles Baker (both of Chattanooga, TN); sisters-in-law: Josephine Kelley (of Tuskegee, AL) and Geraldine Baker (of Chattanooga, TN) and a host of nieces, nephews, cousins, friends, and extended family to celebrate her life, love, and legacy. Services were held on Tuesday, January 25, 2022, at 12 noon at M.J. Edwards Funeral Home, Stage Road Chapel, Memphis, Tennessee. Alice will lie-in-state on Friday, January 28, 2022, at 9 a.m. at Taylor Funeral Home. Funeral service will follow at 10 a.m. in the chapel with Rev. Dr. William Ladd as the eulogist. The family requests that remembrances be made in the form of contributions to St. Jude Children's Research Hospital through the Alice Spence Memorial Fund via https://tinyurl.com/alicespencememorialfund. Directions for Live Stream: 1. Go to Your Facebook Page 2. Type: taylorfuneralhomeofchattanooga 3. Click 'Like' or Thumbs Up 4. Scroll down to view the service at 10:00 a.m. EST on Friday, January 28, 2022

Alice Marie Baker Spence, formerly of Chattanooga, departed this earthly realm on January 19, 2022, in Memphis, Tennessee. She was born December 29, 1932, in Rocky Face, Georgia. Upon death, Alice was reunited on the celestial shores of heaven... View Obituary & Service Information

The family of Alice Marie Baker Spence created this Life Tributes page to make it easy to share your memories.

Send flowers to the Spence family.